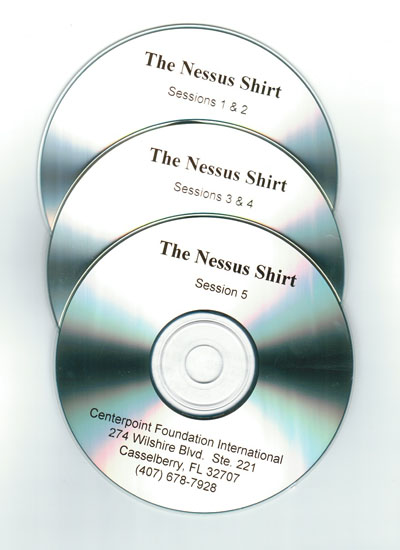 The Nessus Shirt CDs
Author: Chandler Brown For those who wish to listen to the course content and follow along with the workbook, this 3 CD set can be added for $30. Narrator: Stephen Robin Sessions: 5
Price: $30.00
Helpful Prerequisite: The Threshold

The Nessus Shirt frames a working understanding of Persona and Shadow with the vivid imagery of the Greek myth of Hercules. In the most dramatic moment of the story, Hercules finds the shirt drenched in Nessus’ deadly potion seared to his back and irremovable. Nessus’ shirt symbolizes the danger of one-sidedness, of overidentifying with a Persona of heroism or goodness while suppressing the Shadow or negative aspects of the self. These two Jungian concepts “Persona and Shadow” are defined and illustrated in a way that relates to a lifetime of personal growth and development.

The course examines good and evil, and a definition of wholeness that incorporates these opposites with the capacity to mediate them. Jung’s orientation toward morality is clarified in a way that participants can grasp it and wrestle with it.

The final session offers simple exercises that help identify and engage Persona and Shadow in refreshing ways within us.

About the Author: In the late 1950s, Chandler Brown worked with William Kennedy, the first president of the C. G. Jung Foundation for Analytical Psychology based in New York City. In 1960, she became Associate Director of the Educational Center and pioneered in communicating Jung’s insights in ways that welcomed and engaged people from all walks of life. She continued this mission as Director of Centerpoint from 1977 to 1994.