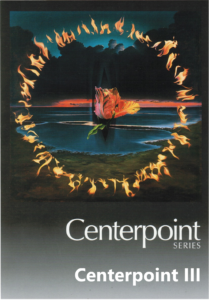 In Centerpoint III, you are richly rewarded as you chart the complexities of the interior world. In material written and recorded exclusively for Centerpoint, three Jungian pioneers explore different facets of the psyche. Bill Kennedy examines the “American Unconscious” in six sessions. Marie Louise von Franz describes psychological projection in a piece she recorded at her home in Bollingen, Switzerland. Edward Edinger speaks from his New York office, presenting “A Psychological Approach to Greek Mythology” in four sessions (14 sessions).

Centerpoint provides a context for individuals to move toward wholeness, a process C. G. Jung called “individuation.” In the words of its authors, the course offers no absolutes, but the use of models…be they from the areas of myth, fairy tale, psychology or whatever, [Centerpoint] suggests that they be used as mirrors reflecting inner reality rather than as telescopes clarifying external truth.
Through this kind of process, we may be able to build up a store of resources … We hope to provide a variety of channels of expression—dialogue, individual writing, music and some creative activities as well.In this type of process things will often not seem to be rationally or logically perfectly clear.
Wagner once wrote of his operas, “I believe it was sound instinct which set me on my guard against an undue enthusiasm for making things clear, for I have come to the firm conclusion that to make my intention too obvious would get in the way of a genuine understanding. In drama and art, generally the way to make an effect it’s not by arguing an opinion but by putting forward something instinctive.” And, we would add, as in drama and art, so in life.

Centerpoint III has the same format as the previous courses, and there the sameness ends. The content of this material is based on the psychology of Dr. Jung, using those basic parts of his work, ego, shadow, persona, anima/animus and so on, to illustrate how these elements of the psyche can be used in developing one’s conscious journey toward wholeness. Chandler Brown, former Director of Centerpoint, traveled to Zurich to interview Bill Kennedy and Marie Louise Von Franz, interviewed Dr. Edward Edinger for his sessions, completing the course with sessions by Drs. William Alex, Anthony Storr and Keith Forsythe Lander. Centerpoint III begins with six sessions by Bill Kennedy entitled “The American Unconscious.”

Mr. Kennedy was an erudite writer and speaker, using many long sentences and unfamiliar terms; often these sessions are read together rather than being listed to on the CD’s. His material, although recorded many years ago, is a remarkably accurate picture of our American world today. Dr. Edinger discusses “the Psychological Approach to Greek Mythology” and its important effect on individual lives. Dr. Von Franz’ tapes concern Projection, an activity all too prevalent in our world today, very much the cause of much of the world’s unrest in the 21st century.

The course ends with Session 14, with Dr. Lander pulling the three courses together with a paper on “A Map of the Psyche.” Centerpoint III is a special course that helps to open up a new understanding of “Who am I? And Who are you? Why am I here? What’s ahead?” Perhaps you will find that you have the power to determine what’s ahead. Try it!!!

Diagram and Description of the Psyche